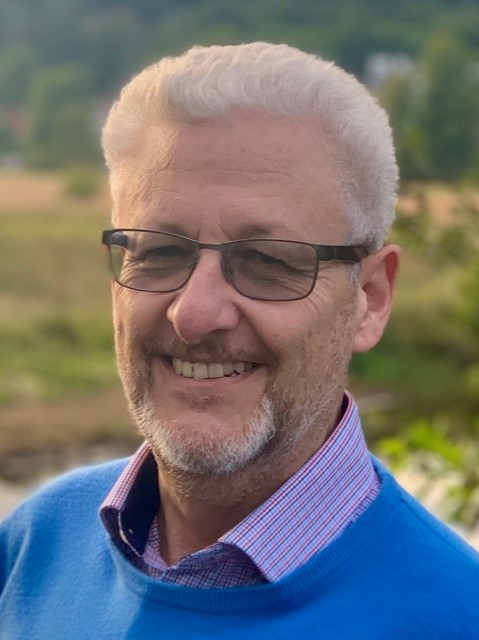 Jeremy Marks was born in London UK in 1952, the oldest of three children.  He was raised in the Anglican Church, a tradition he rejected after witnessing the spite, the gossip, the taking of sides, the downright nastiness and hypocrisy experienced by his parents around the time of their separation and divorce in 1968.  This was a very unnerving experience.

Having begun to realise he was gay by the age of 13, it was fairly obvious that the Church would be hostile to homosexuality too.  There was simply no safe place to go, and this was a terrifying secret to keep locked up inside during his adolescence.  When an old school friend came to faith in Christ and was clearly transformed by this, Jeremy found hope for change and a renewed faith, making a personal commitment to follow Christ at the age of 21.

He spent the next seven years at Guildford Baptist Church under the exceptional expository Bible teaching ministry of the Revd. David Pawson.  Lacking experience of anything to compare this to, outside the CofE, he was unaware that this church was of a very traditional evangelical foundation, anti-gay by doctrinal conviction, though not hostile to those whose ‘behaviour was under control’. Part of the attraction of this warm and friendly church was the sense of security it provided—belonging to a Christian fellowship where preaching the Gospel and a personal ‘commitment to seeking the truth’ was paramount (i.e. life certainties guaranteed by a particular way of reading the Bible).  In a Christian environment where coming to terms with being gay was anathema, paradoxically it was quite affirming to be counted among those who were prepared to ‘crucify their sinful nature’ for Christ’s sake ─ making a virtue of internalised homophobia_ The Church also provided a comparatively safe haven for a gay person in what was still an extremely hostile society, where excoriating social disapproval was the norm, your character likely to be to be vilified and your body and soul seriously beaten up!  Historically this was still a very hard time to be openly gay!

Taking up a career in professional architectural photography, Jeremy worked for nearly 12 years for a publishing company that involved country-wide travel, and necessitated moving to Watford UK. There he joined the charismatic House Church Movement (part of New Frontiers International), where it seemed that ‘healing of homosexuality’ was almost to be expected in a life of faith, because ‘nothing is impossible for God’.  However, after years of receiving counselling, deliverance ministry, healing prayer and even secular psychotherapy, all to no avail, Jeremy then discovered the ‘ex-gay’ movement within the evangelical church.  Although just offering more of the same approach, the ex-gay movement (now known as ‘conversion therapy’) created the opportunity to journey with other LGBT Christian strugglers, mitigating the effects of years of stress, fear, isolation and loneliness.

In 1987, an opportunity arose to visit Love in Action in San Raphael, California, founded by Frank Worthen, also part of a community church known as “Church of the Open Door”.  The Love in Action discipleship houses offered support for gay Christians committed to the ex-gay process—the situation in the US being the same as the UK—there was nowhere else to go!  But LiA also gave immense practical and compassionate care to people who were HIV+ or had full-blown AIDS, at a time when society and the church saw this disease as “proof” of God’s wrath against homosexuality!  This was such an exciting, radical, cutting-edge ministry, that Jeremy gave up his career in photography and spent the rest of that year working with LiA on a training basis.

In February 1988, on return home, Jeremy founded Courage (UK) under the auspices of his local church, at this time the New Life Church Harrow. Evangelical christians did not like being accused of homophobia, so for a church to support an ex-gay ministry seemed to be a really positive thing to do.  Courage soon became one of the leading Christian ministries in the UK for LGBT people committed to the ex-gay ideal.  With a most dedicated team of co-workers, he began offering the year-long “Steps out of Homosexuality” discipleship course developed by Frank Worthen—on a residential basis as from 1989.

In 1991 Jeremy married Bren, who had been a pioneer in the new churches for women in leadership. This marriage was not the fruit of a real change in orientation for Jeremy; it was not a blossoming heterosexual romance.  But rather it came out of a desire for companionship founded on long term friendship and mutual respect.  Jeremy & Bren saw this as a laudable “step of faith, along the path of Christian discipleship.”

At the end of 1994, for various practical reasons, the community houses had to be closed. Courage returned to running weekly discipleship group meetings for an ever increasing number of gay Christians seeking support.  During this time, Jeremy served on the board of Exodus International Europe (part of the time as President), a coalition of ex-gay ministries.

However, after six years of running discipleship houses along the lines of the Love in Action model, Jeremy was becoming deeply concerned by the lack of good fruit from this form of ministry over the long term.  On the contrary, it was becoming increasingly clear—throughout the ex-gay movement—that hopes for  “overcoming homosexuality” had come to nothing. Instead, the disappointment for those who had sought the help of such ministries was absolutely devastating.  At the same time, it was becoming clear that the only people doing really well were those who had moved on to accept their innate homosexuality and found a same-sex partner.  Whereas those who had imbibed the teaching that they must not accept themselves as gay and Christian and would likely endure a lifelong fight to suppress those desires suffered serious depression, some even becoming suicidal.

Twelve years after Courage was founded, after recognising the deep despair that had enmeshed so many sincere LGBT folk, Jeremy startled the evangelical Christian world by publicly repudiating the ex-gay approach, proclaiming that it did more harm than good, and unequivocally embracing a new approach that is fundamentally gay-affirming.

Unsurprisingly this resulted in expulsion from Exodus International, the Evangelical Alliance and other evangelical Christian groups he had been involved with.  Their action was, however, counted a blessing in disguise by Jeremy, who then felt released to speak more openly about his experience and new-found convictions with complete candour.

He was also deeply grateful for new sources of moral support.  Early on this came from (newly outed) Dr Roy Clements, erstwhile pastor of Eden Baptist Church in Cambridge and outstanding Bible teacher (www.royclements.net).  Next came Dr Ralph Blair, founder of Evangelicals Concerned in New York (www.ecinc.org); Dr Blair’s many years of experience as an evangelical Christian and professional psychotherapist supporting gay Christians had clearly borne good fruit that has lasted. It took until 2013 before Exodus North America—the largest coalition of ex-gay ministries—decided to close, for much the same reasons.

From the turn of the Millenium until closing in September 2012, Courage continued to offer pastoral care and support to a great many gay Christians, mainly coming from evangelical backgrounds.  Having felt destroyed by their churches where the ex-gay message was implicit, if they were to find acceptance, these gay Christians are in the process of recovering their self-esteem and learning to accept their same-sex orientation as a gift from God.

In 2010, Jeremy had seen that the time was coming for Courage to finish and make way for new initiatives to develop, appropriate to the 21st century.  He gathered together a group of 12 dedicated Courage members to discuss the future, the upshot of which was that they created the Two:23 Network (www.two23.net). This ministry has continued to work with the same values—seeking to be Christ-centred in all they do—and provides a secure place of fellowship for LGBT Christians to meet and worship together.

Since then, based on what is now 30+ years of pastoral experience, Jeremy has continued to provide support and spiritual direction for LGBT Christians seeking to reconcile their faith and sexuality.  He also helps nurture other initiatives for developing LGBT faith groups and works with churches who are beginning to pursue the way forward towards full-inclusion. One other significant aspect of his work today is to support initiatives to ban what is now called ‘conversion therapy’, given the unusual breadth of his experience in ex-gay ministry.

On a personal level, in 2012 Jeremy & his wife Bren agreed to separate, recognising that a mixed orientation marriage was not working well for either of them.  Since then Jeremy has found companionship and fulfilment in a new relationship with Paolo, a young Italian man.  More recently Bren has also found happiness with a new man in her life.  In a wonderfully fitting closure to their 29 years of marriage, Jeremy walked Bren down the aisle in August 2020 and “gave her away” to her new husband Tim, signing the register as her witness, with Paolo taking photos and video to record the occasion.  Then in October 2020, Bren attended Paolo & Jeremy’s marriage, also as a witness.  Today they are all the very best of friends.

In conclusion, Jeremy’s story has become one of an almost lifelong ministry of reconciliation and the fulfilment of his vocation. The full story of why he changed pastoral approach can be read in his book “Exchanging the Truth of God for a Lie”, available in Kindle format from Amazon, or as a paperback from Jeremy’s office.