When the Son of Man comes, will he find faith on the earth?

Then he said to his disciples, “The time is coming when you will long to see one of the days of the Son of Man, but you will not see it. Men will tell you, ‘There he is!’ or ‘Here he is!’  Do not go running off after them. For the Son of Man in his days will be like the lightning, which flashes and lights up the sky from one end to the other. But first he must suffer many things and be rejected by this generation.

“Just as it was in the days of Noah, so also will it be in the days of the Son of Man. People were eating, drinking, marrying and being given in marriage up to the day Noah entered the ark. Then the flood came and destroyed them all. It was the same in the days of Lot. People were eating and drinking, buying and selling, planting and building. But the day Lot left Sodom, fire and sulphur rained down from heaven and destroyed them all. It will be just like this on the day the Son of Man is revealed. On that day no one who is on the roof of his house, with his goods inside, should go down to get them. Likewise, no one in the field should go back from anything. Remember Lot’s wife! Whoever tries to keep his life will lose it, and whoever loses his life will preserve it. I tell you, on that night two people will be in one bed; one will be taken and the other left. Two women will be grinding grain together; one will be taken and the other left.”

He replied, “Where there is a dead body, there the vultures will gather.”

Then Jesus told his disciples a parable to show them that they should always pray and not give up. He said: “In a certain town there was a judge who neither feared God nor cared about men. And there was a widow in that town who kept coming to him with the plea, ‘Grant me justice against my adversary.’ For some time he refused. But finally he said to himself, ‘Even though I don’t fear God or care about men, yet because this widow keeps bothering me, I will see that she gets justice, so that she won’t eventually wear me out with her coming!’ “

And the Lord said, “Listen to what the unjust judge says. And will not God bring about justice for his chosen ones, who cry out to him day and night? Will he keep putting them off? I tell you, he will see that they get justice, and quickly. However, when the Son of Man comes, will he find faith on the earth?”

Is it my imagination, or have Christians stopped talking about Jesus’ second-coming? Odd if so, since the future is so much on everybody else’s mind at the moment.

In his recent book The Precipice, the Oxford philosopher, Toby Ord, estimates the chance of human extinction before the end of the 21st century to be only one-in-six. Climate change is already happening and will radically disrupt the entire globe within the lifetime of this generation, assuming a viral pandemic or nuclear accident does not do it first! Rather unexpectedly, Ord’s greatest fear is that rogue artificial intelligence could conclude that the human race has no value and destroy it. Such a dystopian vision is very different from the optimism that prevailed at the beginning of the 20th century. Then, humanists like the left-wing biologist J.B.S. Haldane were hailing evolution as the guarantor of a wonderful future for the human race. Today their sanguine utopianism seems wildly misguided. In the words of Meat Loaf: “The future ain’t what it used to be!”

The hope I dreamed of was a dream,
Was but a dream; and now I awake,
Exceeding comfortless, and worn, and old,
For a dream’s sake.

Christians ought to be well-placed to address the disillusionment this anxiety about the future is causing, for Jesus was very clear about the end of the world and spoke a great deal about it. The passage above from Luke’s gospel is very typical. He talks about the coming of “the Son of Man”, a figure drawn from the book of Daniel (see Daniel 7:13) which he identified with the Messiah and with himself (see Mark 14:62). Although in the short term the fate of the “Son of Man” was suffering and death (see Luke 17:25; 9:21, 44), Jesus looked forward to a future time when he would return in glory to judge the world (see Matthew 24:30-31; 25:31-32).

This was not the only occasion when he was asked about the timing of this momentous event. His own disciples put the same question to him (see Matthew 24:3). His response always took the form of a warning. There would be many times of crisis: “wars and rumours of wars”, “famines and earthquakes”. “See to it that you are not alarmed,” he cautioned. “Such things must happen, but the end is still to come” (Matthew 24:6-8). The temptation would be for his disciples to interpret political or natural emergencies as signs that end of the world must be imminent. But the fact is, that terminal date is a secret known only to God (see Matthew 24:36). We shall not have worked it out in advance. Both the wise and the foolish virgins in Jesus’ parable fell asleep because “the bridegroom was a long time in coming”, and the wise had no access to inside information that enabled them to set their alarm clocks.  They differed from the foolish only in that they adopted an attitude of permanent readiness. So advises Jesus: “Keep watch, because you do not know the day or the hour” (see Matthew 25:1-13).

Church history has presented plenty of examples of precisely the kind of adventist hysteria that Jesus anticipated, and among fringe groups it still exists. Some in the dispensationalist school of biblical interpretation, like the American evangelist Hal Lindsey, wrote books in the 1970’s predicting “the Rapture” and the dawn of “The Millennium” before the ominous year 2000. The Jehovah’s Witnesses confidently predicted “Armageddon” numerous times during the 20th century. Somehow such groups still survive despite the embarrassing disappointment of their fallacious forecasts. However, most mainstream Christians have learned that the attempt to calculate the date of the end of the world from the books of Daniel and Revelation is a mistake associated with cults and extremists. No doubt that is one reason for their current silence on the subject of Christ’s second coming; they prefer to anchor their claim to contemporary relevance in the safer ground of social ethics or therapeutic counselling.

But are social ethics and therapeutic counselling what the gospel is really all about? Could we be in danger of throwing the baby of eschatology out with the apocalyptic bathwater, and shamefully subverting the central message of the New Testament as a result? When Jesus commenced his public ministry, it was with the announcement: “The time has come. The kingdom of God is near” (see Mark 1:14 -15). When Paul challenged the Athenian academics, it was with the warning: “God has set a day when he will judge the world with justice” (see Acts 17:31). In days when secular doom-mongers like Greta Thunberg are hitting the headlines, and even sober Oxford philosophers like Toby Ord are ringing warning bells about the approach of an “extinction event”, surely Christians ought to have something to say of similar urgency? This is not a time for Christians be silent about the end of the world. Yet we seem embarrassingly tongue-tied on the subject.

In our study passage, Jesus expresses unnerving doubt on this very point. Not only does he think that the world in general will be oblivious to the nearness of the end, he seems uncertain too about whether, when it actually arrives, there will be believers around who are still expecting it!

“When the Son of Man comes, will he find faith on the earth?”

It is a surprisingly pessimistic question. What are we to make of it? We may comfort ourselves with the thought that its purpose is rhetorical. That Jesus did not really fear the world-to-come would be sparsely populated is clear from his parable of the sheep and goats (see Matthew 25:31-46). But his observation that ‘one will be taken and the other left’ and his warning to ‘remember Lot’s wife’ indicates there will be significant losses, and no safety in social connections. Did he perhaps anticipate precisely the loss of eschatological urgency among his later followers that we have noted as a feature of our current mood? Is that why all the virgins go to sleep in his parable? Is that why he stresses that word ‘Watch!’ so much? If asked to clarify his notoriously cryptic question, would he perhaps have said that, while many in the visible church would be finding comfort in sacramental ritual or energetically pursuing moral crusades on the last day, he feared a conspicuous lack of that which he most wanted to see – faith! The faith which, like that of the importunate widow, seeks refuge from despair about the future by prayerfully looking forward to the salutary intervention of the Judge. 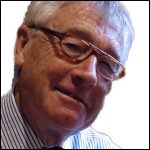 Roy Clements was born in 1946 and grew up in the East End of London. After gaining a 1st in Chemistry at Nottingham University, he completed a PhD in Chemical Physics at Imperial College London. Sensing a call to Christian ministry, he then worked for the University and Colleges Christian Fellowship (1971-74) before serving as assistant pastor of Nairobi Baptist Church in Kenya (1974-79). On returning to the UK, he became pastor of Eden Baptist Church, Cambridge, where he developed a highly successful ministry to students. Over a period of some twenty years, he gained an international reputation as an expository preacher and served on the boards of several leading evangelical institutions and conferences. In 1999, his homosexual orientation was reported in the press, a revelation that led to the end of his Christian ministry and the breakdown of his marriage. From 2000 until his retirement in 2016, he worked as a tutor in the Centre for Academic English at Imperial College London. He now lives with Chris, his civil partner, in Harrow-on-the-Hill and Brighton.